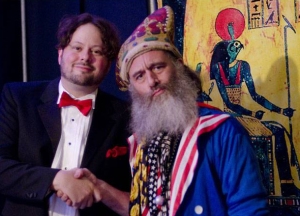 Joseph Thiebes and Vermin Supreme after the debate

Three hours later than planned, after a 6-hour flight and a hurried drive through the suburbs of Boston, I finally arrived in Salem, Massachusetts to find the media team nearly ready for the event that had been anticipated jokingly as perhaps “the most important political event of the year,” (Bernstein) and would later be called “the best fake presidential debate Massachusetts has seen in a generation” (Carioli). I donned my newly fitted black tuxedo with a red bowtie and matching pocket square, and sat down at a table on stage next to a man in the process of fastening a boot to his head. It was Halloween weekend, but the boot was not exactly a costume. Hearing the excited cheers of audience and members of the media team, Vermin Supreme acknowledged that this trademark fashion accessory brings more media attention than any of his other antics.

An ancient tradition in Western culture, political satire goes back as far as Aristophanes in classical Attica, where jokes at the expense of politicians played an important role in the development of Attic comedy. Then, as now, political satire has attracted controversy. In Attica, personal jokes mocking political leaders were eventually abolished (Chronopoulos 207). Today, political satire enjoys more popularity than ever with the advent of mass communication technologies—radio, television, and most recently the Internet. Political satire has become so popular that many young people today claim to get their news from The Daily Show and The Colbert Report, two comedic TV shows which satirize political punditry (Shaheen). Of the various kinds of political satire, the satirical candidate presents the most threatening challenge to the validity of the political process, and therefore often draws the most controversy. Political satire is however a valuable feature in the discourse of society; although rarely constructive, satirical candidacies nevertheless offer a great deal of insight into the errors made by government and the problems afflicting the political milieu.

Vermin Supreme draws attention to oppressive and corrupt policies with mockery in the guise of radical honesty, and has done so in every presidential election since 1988. The mockery begins with his legal name; as he proudly proclaims, “All politicians are, in fact, vermin. I am the Vermin Supreme; therefore I am the most qualified candidate” (Walker). He also frequently promises his audiences that if elected, he will happily enter their homes, sit on their couches, put his feet on their furniture, watch their televisions, and tell them what to do. With such commentary, Supreme draws attention to the fact that politicians often aspire to power rather than service and alludes to the invasion of privacy which often ensues as governments and politicians gain power.

A constant stream of broken promises, ubiquitous in political campaigning, continues to fool many voters in every election. While such promises tend to increase voter apathy, this in turn leads candidates to adopt more sophisticated strategies in making promises which they may lack any ability to implement once in office. Political satire makes an easy target of this cliché problem in political discourse. In the candidacy of Vermin Supreme, he promises if elected that he will provide free ponies for all Americans (Walker). This satirical promise developed in a spontaneous moment of inspiration during Senator John Kerry’s campaign to win the Democratic Party primary in New Hampshire. During an anti-war rally, a call-and-response chant repeatedly asked “What do we want?”  To this, activists predictably responded, “Peace!” After a few repetitions of this chant, Vermin Supreme interjected his own response: “A pony!” This quickly spread through the rally, and Supreme had a new campaign platform (Kennedy 114-115). Since that inspired moment, Supreme’s promise of free ponies for all Americans has become more elaborate, and he now promises free pony healthcare and subsidized pony housing (Steer 11). With the original ridiculous promise, Supreme mocks the promises of all politicians and moreover draws attention to the way that politicians easily shift the focus from ideal outcomes, such as peace, to material wishes. Over time, Supreme has built upon this to directly criticize campaigns which appeal to the American dream of home ownership and the promise of universal healthcare. 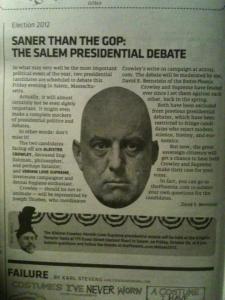 Mandatory dental hygiene is another of Vermin Supreme’s important campaign promises. On one occasion, Supreme used a giant toothbrush to clean the Washington Monument, declaring afterward that “The biggest incisor in the world has indeed been brushed. Next time, floss” (Blitzer). With this platform, Supreme continues to mock the promise of universal healthcare, a major concern in the 2008 presidential election. By framing it as a mandate rather than as a benefit, Supreme’s criticism almost seems prophetic, since President Obama’s program of universal healthcare now includes a requirement that most Americans have some form of health insurance by 2014 or face a fine (Khan). Supreme shifts attention away from concerns about this pervasive dental mandate by promising not to use flying monkeys or tooth fairies to enforce it. He also promises to boost American preparedness for a zombie invasion, evoking fear of the unknown and quelling criticism of all his other platforms.

By blurring the line between politics and entertainment, Vermin Supreme raises questions about the extent to which entertainment has already pervaded the political landscape. From one perspective, he clowns about politics and ridicules the electoral process. From another perspective, he mirrors the clownish behavior of politicians and draws our attention to reality: that political discourse has become more about entertainment than many of us are comfortable admitting. Political commentators and voters alike often feel that satirical candidates like Vermin Supreme undermine and cheapen the electoral process. Reporter and news anchor Sam Donaldson once blustered at the suggestion that he cover Supreme’s campaign, saying that “as a reporter, I’m under no obligation to pay any attention to him. We’ve a very valuable, small amount of air time at ABC News. I wish we had more. I should spend our time on Vermin Supreme? Not a chance!” (Blitzer). Such criticism, however, merely demonstrates a lack of perspective and insight. Through such myopic and humorless comments, Donaldson and others that express their annoyance at Vermin Supreme’s campaign give credibility to the satire which mocks exactly that kind of shortsightedness. As syndicated Washington Post columnist Charles Krauthammer put it, “He sounds like a jester out of King Lear. I mean this is a classic figure in history. There’s always the fool in the court who’s half nuts, but half wise. The one who whispers in the ear of the conqueror, ‘you’re mortal’ … Slightly insane, slightly a bit of a put on, and a lot of accurate satire. I don’t think it’s a detriment to the political system. I think it’s a nice accoutrement” (Blitzer).

Sitting next to Vermin Supreme in satirical political debate, my own efforts at mocking the political landscape played the role of the straight man in a comedy duo. As I promoted a campaign to elect a dead British mystic by quoting from the political essays of Aleister Crowley, Supreme offered counterpoint in song and slapstick, and at one point brandished a toy gun in an attempt to derail the proceedings. The debate was ultimately hailed by one newspaper editor as being saner than the other debates which have so far taken place among Republican Party candidates for president in 2012 (Carioli).

This site uses Akismet to reduce spam. Learn how your comment data is processed.